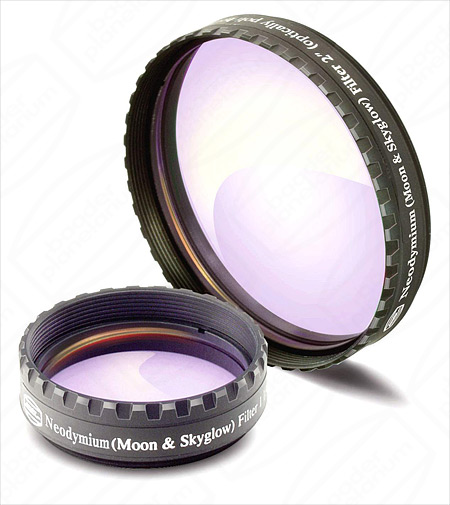 Drastic contrast enhancement for all telescopes, without loss of image brightness! This filter is initially based on a development by Carl Zeiss. The effect of the element neodymium as filter material is very impressive. If used as co-mixture to optical glass, it improves the contrast and enhances the red portions of the image (especially for Mars and Jupiter). At night it blocks that part of the spectrum, which suffers most from street lighting – and it blocks the light pollution, also known as „skyglow". And lastly, the applied UV/IR blocking coating (Luminance-coating - check the spectral trace) cuts all unwanted UV below 400 nm and NIR above 700 nm - this makes it the „sharpest contrast enhancing filter" for imaging.

Compare with the moon & Skyglow filter before the naked eye, to test the effectiveness. Red and blue colours are extensively strengthened. If you cannot see the GRS (Great Red Spot) due to pollution try this which will allow you to see it.

In order to establish a precise plan area and to maintain the planarity despite the applied forces through the different layers of coating, a high technical effort is necessary. You have to choose from a large amount of raw glass only the best pieces in tension-free annealed quality to even hope for a good final quality may. All too easily, the glass deforms with improper preparation or coating on older evaporation systems. The final product is almost useless, if not greatest of care is taken at every stage of production.

SURFACE DETAILS ON MARS, JUPITER AND MOON AS WELL AS MANY DEEP-SKY-OBJECTS BECOME MUCH MORE PROMINENT. 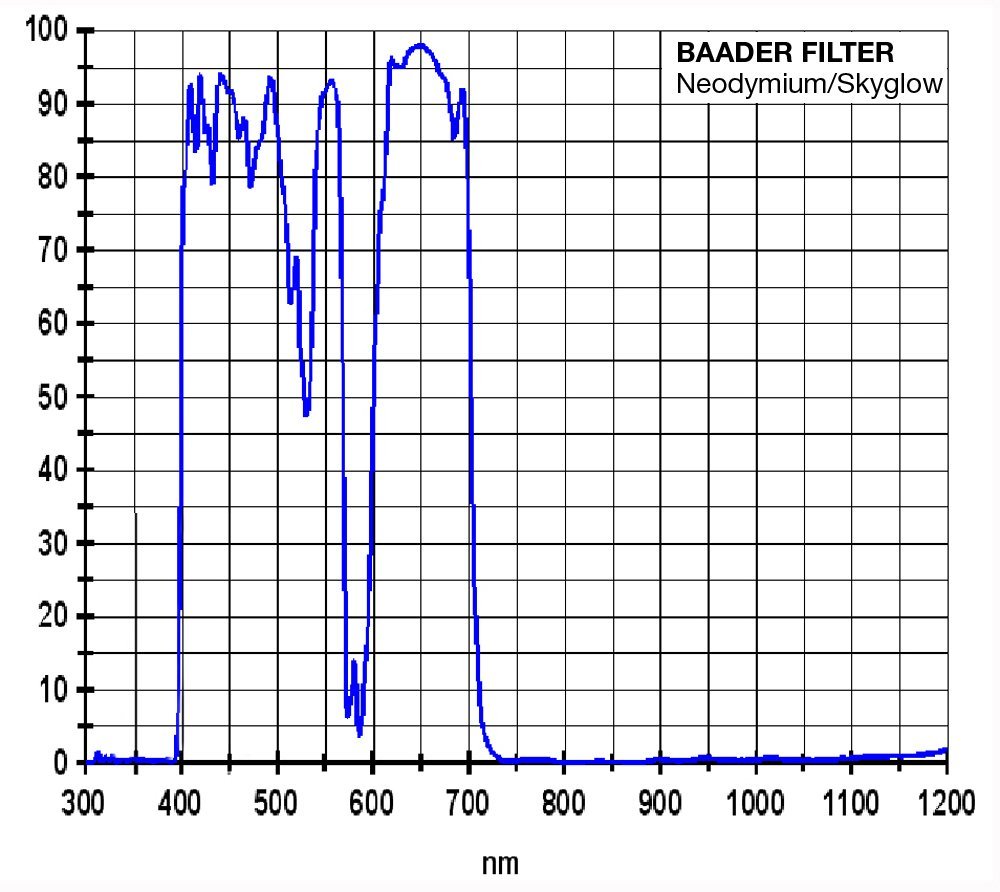 The adjacent graph shows you the spectral curve of our Neodymium Moon & Skyglow filters. On the horizontal axis, the wavelength in nanometers, and the vertical axis is the transmission amount (opacity) specified in percent.

The area under the curve is the spectral range that can pass through the filter.

Important note: Before you buy a "Moon and Skyglow" filter, which is now available from several manufacturers, compare the transmission curves! You will find that the original "Baader Moon&Skyglow" filter has the highest transmission and is blocked in the UV/IR, with the same layer system as a Baader L filter. This means sharper images because only the spectral range where the telescope can deliver a sharp image, reaches the chip. In addition, our filter is plano-optically polished.  Only few manufacturers are willing to do this, only because of this the filter is also suitable for the highest magnifications.