For almost 20 years (as well as 20 years ago already) our customers had asked again and again: "Do you have a barlow lens or projection eyepiece – but with a flat field – which can be used with medium format (6x7 Pentax) cameras for imaging sun, moon and planets, but without the typical loss of sharpness?"

This bothered us back in those times , and finally one of the designers of the Zeiss APQ lenses calculated the ultimate projection system with a flat image field in 1997. To actually make this design become reality, extreme types of glasses were needed. In this case, two multi-coated fluorite-lenses - at that time and until today - a nightmare to produce.

The result was an optical system with an unmatched sharpness, with a ten times higher resolution of line pairs than a Zeiss Abbe eyepiece. Even so the days of emulsion film cameras are long gone, this lens system has persisted to be "the sharpest barlow ever made".

By changing the distance to the camera sensor, you can vary the magnification between 3x and 8x. The optimum line resolution is set at 4x magnification, then you have the full sharpness over an image circle of 90 mm diameter. On the axis, the sharpness is only limited by your telescope – even at a magnification factor of 15x. We have tested this at an AstroPhysics lens telescope. Slowly slowly even the large diffraction limited field of 90 mm will become of importance again - with the advent of ultra-fast and giant CMOS-cameras covering a field of 70 mm in diameter.

The FFC can be connected onto every T-2 thread and its 2" main body likewise fits into every 2" eyepiece clamp. With the help of our Astro T2™-System and the M 68-System you can connect it onto a whole world of telescopes.

For best results, you need to keep a certain distance to the original focus point. Please take a look at the PDFs in the Download-section for technical information

Eyepiece Projection - How Good Can It Get?

Question: With eyepiece projection, the image at the edge is extremely blurred. What could be the reason for this? For eyepiece projection with our Morpheus and Hyperion (zoom) eyepieces, we recommend a distance between eyepiece and T-ring of 40 mm on full-frame cameras, in addition to the 55 mm that were the flange focal distance of all "SLR" and DSLR camera bodies for decades when a T-ring was placed in front. Only with a T-ring that maintains this distance can old lenses with a T-thread deliver sharp images. Therefore, it has been tried to take this distance into account in all designs, because this is the only way to ensure that the sharpness performance is optimal. Of course, all this is only valid to a limited extent today - because the DSLR standard is losing it importance and the term „T-ring“ is all too often reduced to the mechanical thread and not the correct distances. In our brochure on digiscopy, we have therefore stated the back focal distance of 55mm. With a DSLR (full frame or APS-C), this distance is also maintained in good approximation with modern, narrow T-rings, which are intended for use on telescopes, where every millimetre often... 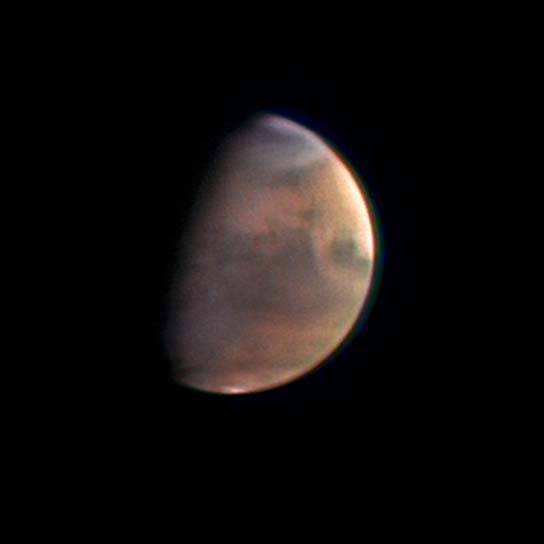 When you are observing and photographing planets, the power and quality of each part in the chain is very important. The result is heavily influenced by design, material, polishing quality of the optical surfaces and the utmost in suppression of stray light. Even small optics can then deliver very good results.

About two years ago I had used the Fluorite-Flatfield-Converter by Baader for the first time ans was positively surprised. I could achieve a better contrast and resolution with the Baader FFC than with normal barlow lenses of good quality.

I use the projection system with up to 8x magnification for taking photos of the planets. This is a rather long setup, and the price seems high, too. But it is well worth the money if you take a look at the build-quality and the achievable results. During the Mars-opposition in 2003 I could take some images with the APQ 130 and the FFC. For such a relatively small telescope, I think they are really pretty good!

HOW TO USE CAF2 OPTICAL SYSTEMS. FFC-WARNING ABOUT POSSIBLE LOSS OF WARRANTY:

The Baader-FFC contains lenses which are made of real Calcium fluorite crystal. CaF2 has got an impressive refractivity which enables construction of the ultimate lens system that can deliver an incredible amount of sharpness across a very broad spectral range. No other barlow lens design can combine a similar sharpness with such a large image.

Unfortunately, such sophisticated optics are very sensitive to tension caused by temperature differences.

Also avoid fast changes in temperature during night-observation/imaging. Never use any Fluorite-lenses (especially not in the front lens of a telescope) at -20°C and then all of a sudden put it it into your living room at +20°C or more! In such a case, the resulting severe temperature stress just as well can be detected, when the lenses end up damaged.

Every CaF2 optic needs time to adapt to the surrounding temperature. To do so, for example bring the optical system into the outside in an insulated box and allow it to cool down inside that box over the time of an hour. Keep the box closed but outside. After the imaging session put the FFC back into the same box and allow it to gradually warm up inside that box while bringing it inside the house. Keep it there for at least one hour until you open the box and check that any moisture can dry out.

Please do not use the FFC, if you can not supply the environment and time, to treat this high-end optical system in the way it demands.